Last week was very much 'new guitar week' both for me and for my first 'student' Richard who has been coming to my workshop a couple of times a week since the autumn to build himself a guitar. Whilst his aim at the beginning was to build himself a guitar which first and foremost had good tone with looks coming a distant second, he pretty quickly succumbed to pretty woods and shiny bits of shell. He's ended up with a guitar that looks great and sounds great too, the sound will continue to improve over the coming days, weeks and months as the wood loosens up and things settle down. The soundboard is European spruce. Back sides and neck are Claro Walnut. Binding and end fillet are Very figured Koa, fingerboard and front headstock veneer are ebony while the back veneer and bridge are burr oak and Indian Rosewood respectively. Rosette is abalone, the finish is Nitro cellulose over french polish. 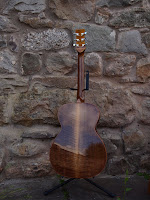 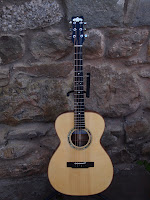 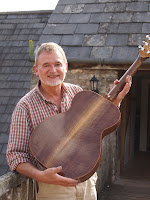 Well done Richard and thanks for the canoe!

My new guitar is the first of a new body shape for me, my usual long scale length and a neck that joins the body at the 14th fret. Continuing the theme of naming my guitars after places I have fond memories of from summer holidays camping in West Wales this is the Rhossili model and will be on my website just as soon as I take some flashy photos of it. This particular guitar has a sitka spruce top, Indian rosewood back and sides, Koa binding ( that I managed to use before Richard nabbed the rest of it) reclaimed Mahogany neck Rosewood bridge and ebony fingerboard and headstock veneer. Its a bit of a departure for me as I usually build guitars suited for fingerpicking and this is a bit more of an all rounder, the harder sitka spruce usually favours plectrum playing but we'll see as the sound opens up. 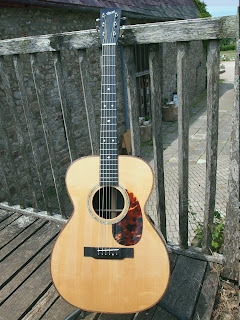 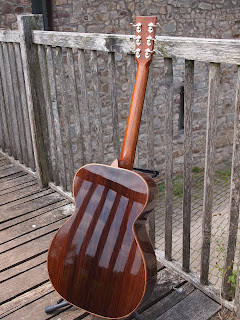 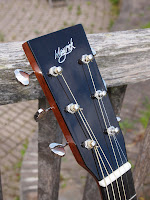 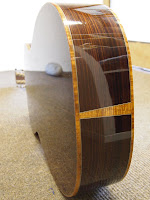 http://www.richardmeyrickguitars.co.uk/rhossili.html
Posted by Rich at 14:12