I've had a bevvie of repairs in recently, so I thought I'd share them. First up is a Martin 000-18 reissue owned by nick from the excellent blues duo http://www.mikemarkeyandnickjones.com/index.htm with a loose bridge. Sometimes if a bridge is only a little loose on the corners, then a little glue can simply be injected and then clamped but this one was pretty loose so it had to come off. I use a variety of knives to get underneath the bridge. Its a tricky process, great care has to be taken not to slip the knife into the soft spruce of the soundboard or put a knife through the finish but after a few minutes and a loud 'pop' the bridge comes off.

Once the bridge was off, I scraped off the old glue residue from the bridge and soundboard. Its very important to have a very wood to wood glue join in order for the glue to perform. The bridge is one of the most critical glue joins on a guitar as it has to take the load of the strings. Once I glued the bridge on and left it clamped up for a day I spent some time at the buffing wheel to touch up a few lacquer cracks which had developedover time, then the guitar was restrung and sent out the door. 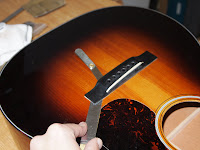 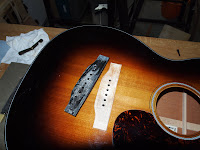 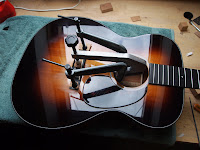 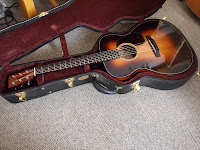 Another job was to refret a very nice but much used parlour guitar made by Pete Howlett. The frets were first removed. I use a soldering iron to heat the fret and a little lemon oil to soften and lubricate the wire before using special pliers to gently ease the frets out. Once out the fingerboard was prepared, sanded flat and any chip outs repaired. Then the new frets were installed. This guitar has binding, so the ends of the tangs have to be removed so that only the top of the crown is on top of the binding. Once the frets were installed I then levelled and reprofiled them prior to restringing. After this the guitar was a real beauty to play and should be good for many years yet. 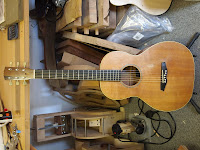 http://www.richardmeyrickguitars.co.uk/guitar%20repair%20%20and%20setup.html
Posted by Rich at 22:24